Market Challenger Strategies – How to attack to increase Market Share

Market challengers may not be the most powerful ones in an industry, but can still be the most dangerous ones due to their aggressiveness. In order to successfully increase market share as a market challenger, the right tactics are essential. In the following, we will investigate different market challenger strategies that firms use to improve their position in the market.

A market challenger is a runner-up firm in an industry which is fighting hard to increase its market share. Usually, aggressive competitive tactics are used for this, aimed at the market leader.

Attacking the market leader is risky: the leader probably has the most resources. However, there is of course the most to gain from a successful attack. In order to actually win market share from the market leader and avoid a disastrous end, clever market challenger strategies have to be used.

Market challenger strategies can be grouped into five types, which will be explained in the following. 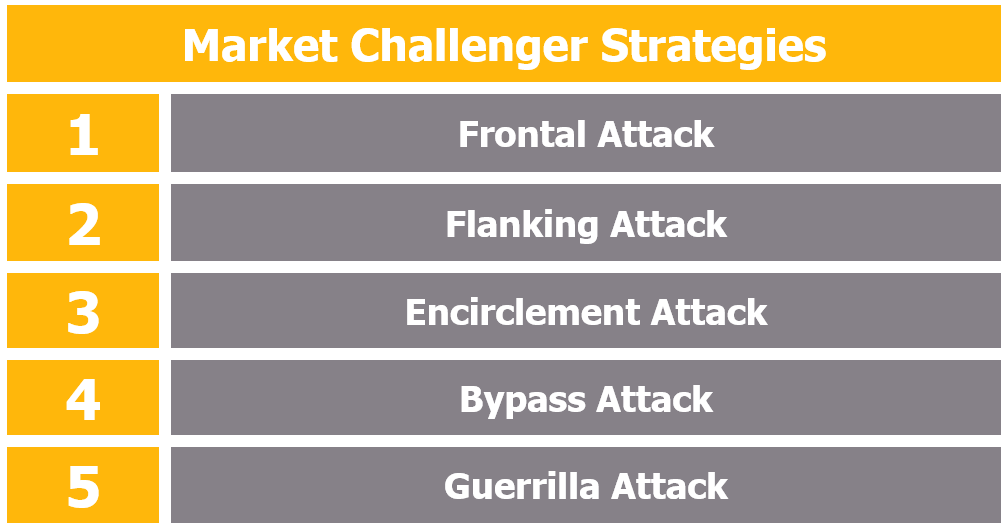 In a frontal attack, the challenger attempts to match the market leader’s efforts across the full range of products, attacking the leader’s strengths rather than its weaknesses.

In these circumstances, the company with the greatest resources usually wins, as this strategy leads to a downright war of attrition. It is usually only appropriate for large firms entering a foreign market, as domestic sales can help subsidize the cost of the ‘war’.

In a flanking attack, the market challenger concentrates on the leader’s weaknesses rather than its strengths.

By seeking out a part of the leader’s business that is being poorly served, or could be served better, the challenger often manages to capture a segment without much of a fight. Market leaders will often let a marginal segment go rather than enter into a costly battle.

An encirclement attack involves attacking from several directions at once.

This strategy requires the market challenger to have more resources than the defender, so it usually only works well when entering a foreign market.

In a bypass attack, the market challenger attempts to bypass the market leader entirely and targets new markets.

This might mean entering foreign markets that the competitor has not yet targeted, or it might mean using new technologies to approach new customer groups. Since the attack is indirect, retaliation by the market leader is rather unlikely.

In a guerrilla attack, the market challenger makes occasional attacks on the larger competitor.

For this, different tactics are used each time in order to confuse the market leader and prevent effective retaliation. The constant switching of tactics prevents the market leader from organising a retaliatory attack.

Evolution of Marketing Theory – From Production to Marketing Orientation