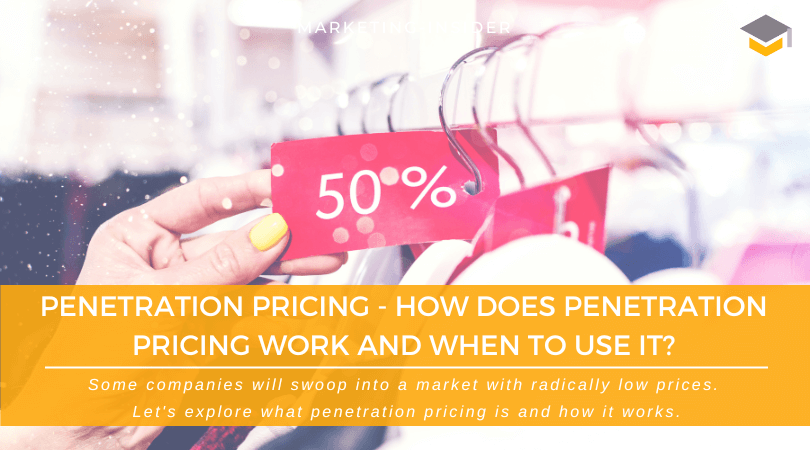 What Is Penetration Pricing?

Penetration pricing is a pricing strategy that involves offering goods and services at a significantly lower cost than those given by incumbent brands in a market. The strategy’s purpose is to take a bite out of another brand’s consumer base, even if it means low short-term profit margins.

How Does Penetration Pricing Work?

Penetration Pricing works by presenting an initial price that is significantly lower than the market’s going rate. An effective penetration strategy ensures that a company not only gains customers for a single transaction, but also keeps them as long-term customers. There are two options for accomplishing this.

This principle holds true for innovative products as well. To encourage individuals to try a new product or service, the price barrier is lowered. The company establishes a price that is a steal for its unique value while still being less expensive than alternatives. Competitors have less time to react before the company gains market share and establishes itself as the new norm.

When demand for a new product or service is expected to be high, penetration pricing is commonly applied. The aim is that the higher sales volume will compensate for the lower cost.

In another article, we have explored an alternative entry-pricing strategy in detail: Price Skimming. The following is a comparison of penetration pricing and price skimming.

Penetration Pricing may be defined as a pricing strategy used by a company to attract a large number of customers, in which the product is first supplied at a low price. Penetration pricing is thus mainly about volume. Price skimming, on the other hand, refers to a pricing strategy in which a high price is asked at the beginning of the product’s lifecycle in order to maximize profit.

By selling goods at low prices, penetration pricing tries to secure a large market share. In contrast, the goal of utilizing a price skimming strategy is to maximize profit from clients by providing the product at the highest price.

When demand for a product is relatively elastic, the penetration pricing strategy is used. Price skimming, on the other hand, is utilized when the product’s demand is inelastic.

The company sells a large quantity of goods since the price of the product is initially low in penetration pricing. In price skimming, volume is sacrificed in order to maximize margins.

There are a few pricing strategies that sound very similar to penetration pricing but differ significantly. Here’s a closer look at each one of them:

Penetration pricing is used by only a few types of enterprises.

The act of an organization wedging itself into an existing market and claiming new clients from established brands is known as market penetration. There are several methods for gaining market share upon penetration, including penetration pricing. Price Skimming (where you start with high rates and progressively drop them to attract budget-conscious customers), heavy advertising (where prices mirror the going market rate but you attract people through ad campaigns), and word-of-mouth marketing (where you count on early adopters to organically spread the word about your new brand) are just a few examples.

Penetration pricing has a number of benefits for both organizations and customers.

Penetration pricing can cause market upheaval, but this isn’t always a good thing.

Netflix is a great example of how market penetration pricing may be used to beat out a big part of the competition. DVD rentals were popular in the late 1990s and early 2000s. Despite dominating the home entertainment market, Blockbuster was known for late fines and limited offerings.

Netflix had a one-of-a-kind proposal. Customers might access a greater movie selection without incurring late fees if they could wait a day or two for their DVDs to arrive. To entice Blockbuster customers, Netflix stressed convenience and affordability from the start.

For the $15.95 subscription plan in 2000, Netflix users could rent four movies at a time with no return deadlines. Regular moviegoers could thus rent DVDs for as little as $1 each day, compared to $4.99 for a three-day rental at Blockbuster.

Netflix was able to grow its member base and reach profitability in 2003, five years after it first opened, thanks to penetration pricing and a unique idea.

Customers were able to test their new service and make the transfer because of the cheap initial price point. The company’s easy-to-use online streaming offering moved it into the future in 2007. Blockbuster filed for bankruptcy in 2010 due to intense competition from Netflix and Redbox, another new rental provider.

The penetration pricing strategy is used in a variety of ways by businesses. Some of them use discounts, promotions, and other gifts to entice clients in addition to having a low price for their core product. Here are a few examples of what we’re talking about:

These pricing and marketing strategies are used by entrepreneurs to attract new clients and promote repeat business.

Penetration pricing is a powerful entry-pricing strategy, but at the same time is a challenging one to implement while securing long-term profitability. It can be a good approach to attract customers, generate goodwill, and set yourself apart from the competition. However, in the early stages of a business, it might lead to uncommitted clients and narrow margins.

A break-even analysis could assist you decide whether penetration pricing is the proper strategy.

Savvy and Creative Ways to Promote Your Business...

The Macro Environment in Marketing – Why is...