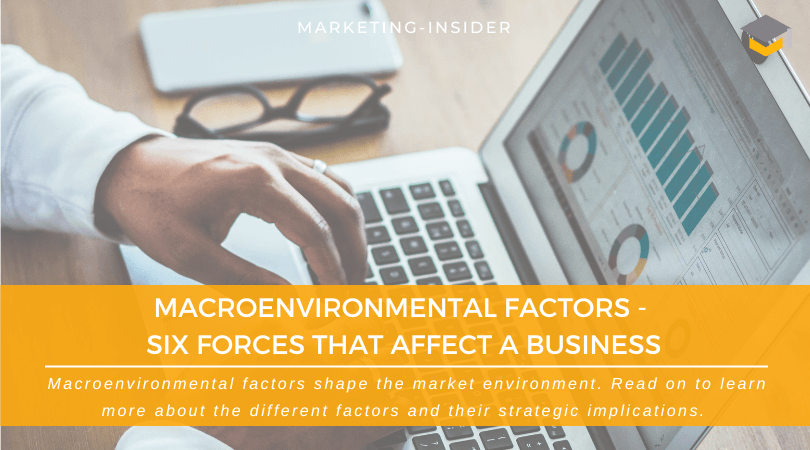 Macroenvironmental factors are those external forces that shape how businesses operate, perform, and make decisions. These forces are usually outside of the control of an individual business and every corporation has to strategize regarding these forces as they influence the economy as a whole and thereby the firm and its competitive environment. Each of these self-contained forces has to be carefully analyzed to identify the potential opportunities and threats they impose in the context of any particular business.
Read on to learn more about the six different macroenvironmental factors. We will see how they affect a business as well as go into strategic implications. For each factor, you will find examples to aid understanding.

Before diving into the various macroenvironmental factors or forces, let’s stop here for a second to talk about frameworks. In marketing lecture, you usually find one of several frameworks capturing the different factors. These frameworks differ regarding their scope.
DESTEP or DEPEST is one of the most commonly used frameworks, it is an acronym for Demographic, Economic, Political, Ecological, Socio-Cultural, and Technological forces. Another influential framework is the PESTLE framework which disregards demographic forces for Legal forces.

There is also the PEST analysis which disregards the Legal and Ecological forces. Another emerging framework is STEEPLE, which includes 7 forces and adds Ethics to the PESTLE framework.

Let’s now go on to learn more about the six macroenvironmental forces that are covered in the DEPEST framework.

This macroenvironmental factor relates to the public and their division based on location, population, age, gender, occupation, ethnicity, education levels and other related statistics.

People form the basis for any economy to operate, and fulfilling their needs is the reason for any business to exist. The demographic force particularly relevant for a business that relies heavily on certain demographics to operate and function. Hence the study of population structure and diversity is crucial in discovering new opportunities as well as potential risks. The diversity could include various factors like a substantial change in the age gap or gender disparity or any drastic geographic shifts in population. Marketing and business strategies for such companies need to be based on the population size and key characteristics of the targeted area they are dealing with.

In certain situations, rapidly changing demographics result in the creation of new companies that emerge utilizing the changes to their benefit. Similarly, companies failing to analyze and predict critical demographic changes may risk going out of business as they are left behind by their competitors.

For example, According to the World Health Organization, “the global population age 60-and-over will encompass more than one in five human beings by mid-century, rising from 900 million in 2015 to 2.1 billion in 2050”. This statistic has many potential implications such as the medicine industry catering to specifically older people booming and the businesses affiliated with this age group taking care of the many needs.

The economic environment of an area affects how customers and consumers tend to spend and dictates changes in their buying power. In other words, economic factors dictate spending power and spending patterns of the general consumer. This macroenvironmental force depends upon several factors:

The political environment of a region fundamentally shapes how any particular business behaves, as the policies involving laws, trade tariffs, taxation, legislation, government agencies, and different pressure groups are directly influenced by the political bodies in charge of a country. Every organization has to position itself according to the changing political environment and adapt to changing policies. They have to strategize around different political mindsets coming into power and plan according to different tax and economic structures implemented by the ruling powers.

For instance, according to a press release by the white house on January 25, 2022, Biden’s administration’s policy of expanding access to low-cost loans, and investments and increasing access to federal contracts for small businesses has surged applications for new small businesses by 25% in the year 2021. This means that there is a massive opportunity for smaller businesses to grow under the new political administration. In contrast, there are plans to increase tax rates for larger corporations meaning that the billion dollar corporations need to develop strategies beforehand to deal with the repercussions of the new legislation.

Among all macroenvironmental factors, ecological forces have increased in importance in recent years, as the world’s biggest economies are shifting their focus to saving natural resources and are increasingly moving towards a renewable form of energy production mechanisms. There is also more consideration given to preserving the environment by limiting the release of harmful gases as the general awareness about the condition of the environment is spreading especially on social media and through activist groups. Major corporations like Google and Microsoft have recently made huge breakthroughs in AI software that find inefficiencies in industry operations and reduce carbon emissions drastically.

As the world population is getting more aware of the harmful effects of non-renewable energy sources and their consequences on our environment, more people are turning green in their daily lives and choose products that are produced by somewhat close to or completely on zero-emission cycles. This in turn is shifting existing organizations to lean towards more green solutions and newer emerging companies to focus heavily on producing lesser carbon footprint than their predecessors.

Many upcoming startups are getting traction for their recyclable products with zero-emission cycles. For instance, Forbes reported in 2021 that Redwood Materials, a startup that recycles Lithium-ion batteries raised over $700 million in funding. It quickly dominated the market and has currently been valued at over 3.8 billion dollars.

Socio-cultural factors relate to the behavior patterns of demographics, what different populations relate with and their preferences stemming from their cultural values. People in every region have a set of traditions and cultural values and tend to behave differently.

It is especially important for any business to take these socio-cultural aspects into consideration to successfully create their market space in a region without hurting the sentiments of the general masses. Many successful businesses cleverly use specific cultural preferences when moving to new markets to make their product feel familiar to the people and generate growth opportunities through the advocacy of consumers.

Clothing industries are particularly careful when jumping into new regions as cultural backlash is a very real threat. Chanel and Burberry for example, are seen producing relatively cultural clothing lines in India catering to the traditional behavior of that demographic, as their usual fashion lines are bound to be rejected by these cultures.

The emerging technology of our modern times, like for instance the advancements in AI and machine learning, has given space for miracle technologies in the fields of medicine, law, economics, manufacturing and computer. It has not only allowed businesses to create new ways to serve their consumers better but also improve the quality the end-user receives.

For organizations to stay ahead they must try to predict where the technological advancements are going in the future. This is obviously rather difficult. Nonetheless, staying up to date and preparing early should not be delayed to the last minute.

For example, with the rise in popularity of Netflix, retail and rental movie selling businesses like Blockbuster have either gone out of business or are struggling to find customers, and we see a shift in paradigm with all the major corporations starting their streaming services. This technology has single handedly revolutionized how people consume entertainment and has created a huge impact on television, movies and the entertainment industry as a whole.

This macroenvironmental force includes all kinds of legal and regulatory conditions in a region. The laws in a region affect how an industry fundamentally functions and how it behaves regarding employment issues, safety concerns, equal opportunities, advertising standards, product safety, product labelling, and so further.

For example, BBC reported in early 2021 that a first-ever law was passed by the Australian government that forces digital media platforms like Facebook and Google to pay for any news shown on their sites. This caused Facebook to stop all the news coming in from Australia for quite some time. Similarly, different countries and regions have different copyright laws and legal environment, which needs to be carefully analyzed by corporations to avoid any legal action against them.

Any business operating anywhere in the world has to carefully consider its surrounding macroenvironmental factors to function properly. These factors, when combined with the right strategies, may bear fruitful opportunities, but also threats when ignored, misunderstood or combined with the wrong strategies. A careful analysis of each of these individual forces needs to be carried out by corporations to effectively perform and grow in this more than the ever interconnected world.

Marketing vs Advertising: What’s the Difference?

What is the Core Product? Understanding the Core...

How to Develop New Products? Steps to Successfully...

The Key Features of Services and How to...

What is Green Marketing? Definition and Examples of...

What is Sustainable Marketing? – Definition and Implementation...