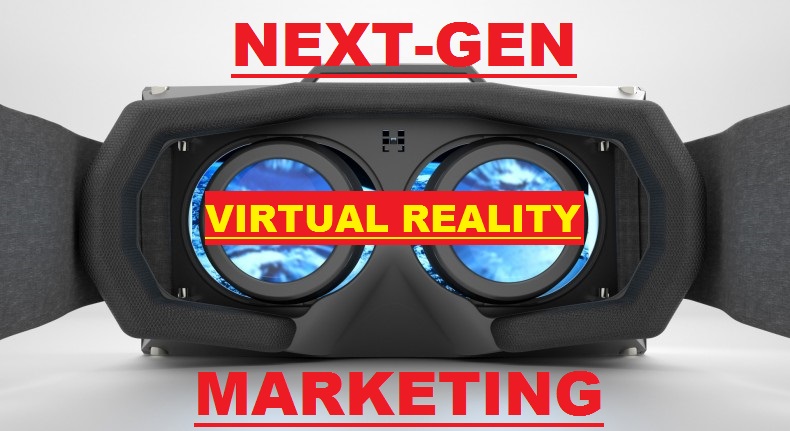 Are you looking for a Next-Gen Marketing Tool? One that may boost your business in the future? One that allows you to market things in a way that was not even imaginable before?

Here it is: Virtual Reality. “Build a world that people want to inhabit and the inhabitants will come.” Charles Stross, a science fiction and fantasy novelist, describes the potential of virtual reality for marketing as a Next-Gen Marketing Tool in a perfect way.

With every new article or breakthrough in virtual reality, more and more people start to think about how this new technology may shape our lives.

“Oculus Rift,” is the most famous company and model of virtual reality technology. And it’s not just gamers buying into the technology famously exhibited in movies like “The Matrix.” Oculus was purchased by Mark Zuckerberg and Facebook for $2 billion, with Zuckerberg calling it a “long-term bet.”

As revolutionary as the technology may be, it doesn’t matter in a marketing sense until the technology is in the hands of the everyday consumer. Most people have smartphones, but how long until owning virtual reality goggles is the norm? Virtual reality as a Next-Gen Marketing Tool: how long will it take?

The first personal computers came out in 1974 and were incredibly rare. It was another two decades before it was normal to see a desktop computer in the average consumers’ homes. It took that long, even though pioneers like Steve Jobs, Stephen Wozniak, and Bill Gates were introducing their earliest products in the late 1970s.

However, with the current landscape of information sharing, and since we’re already speculating, let’s assume virtual reality is common in households within the next decade. How does that shake things up?

It might make virtual reality the perfect Next-Gen Marketing Tool!

Society is crossing a bridge when it comes to advertising. Never have consumers been more bombarded—both via medium and frequency—with ads. And consumers have had enough, with Adblock technology not only skyrocketing in use, but also being endorsed by major brands forming an unstable and unpredictable relationship between the advertiser and consumer. Read more on the evolution of advertising.

Research has shown that consumer responses depend greatly on certain stimuli like image speed and music tempo. The epitome of this could very well exist within a virtual reality experience. This fact matters more now than ever, as consumers are exposed to a countless number of ads every day, a large percentage of which fail to capture our attention. Virtual reality, will turn heads and force businesses to adapt in order to keep up with the technology’s impact.

While consumer psychologists have studied the cognitive effect of marketing and advertising for decades, virtual reality may be the first instance in which consumers are affected not only mentally, but also physically by advertisements. A true Next-Gen Marketing Tool!

Researchers observed increased heart rate, dizziness, and occasional nausea in subjects who took part in virtual reality versus those who simply observed the experiment.

So virtual reality is not just any toy of some developers, it is an incredible piece of technology that can provide huge value for marketing. Virtual reality may become the next generation of marketing as a Next-Gen Marketing Tool!

Sounds great! When can we start to use this Next-Gen Marketing Tool? It may still take a while. Preliminary models of Oculus Rift cost $350 and will require high-end computing power to go with it—the latter a major disqualifier for many.

While virtual reality is already in the hands of a selected few establishments, history tells us it won’t be a force until it enters the home of the average, middle class family.

Even when the availability is at the right level, predicting consumer behavior with technology is impossible. The Apple Watch, Segways, and Google Glass are just three examples of products that appeared revolutionary prior to launch, but have yet to impact the world in the same way other inventions have.

If the masses don’t enjoy wearing big goggles over their mugs, virtual reality could follow the same path as other underwhelming innovations that are treated as toys.

What may separate virtual reality from the rest is the all-in behavior from industry leaders. Microsoft has “HoloLens,” Google has “Magic Leap,” Samsung has “Gear VR,” and Sony has “Project Morpheus” for PlayStation all on the way in addition to Oculus Rift.

So the expectations are mixed – but what we can say is: Virtual Reality has enormous potential for marketing. Chances that it becomes the Next-Gen Marketing Tool we are waiting for are immense.