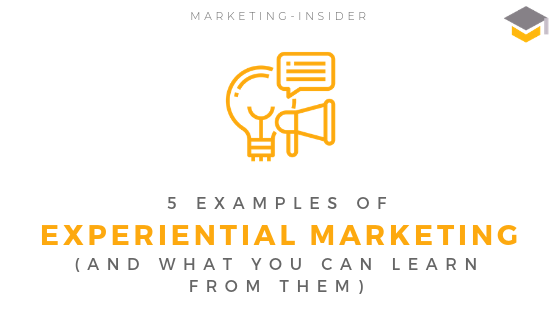 By now, we’ve all become somewhat inured to traditional forms of marketing. Don’t all the ads blur together so easily, particularly now that we spend so much time scrolling through news sites and social media feeds? Most people block online ads, skip video ads as soon as possible, and pay as little attention to advertising in general as possible — you know what we are talking about.

Does this mean that the marketing world is in steep decline and should be in panic mode? Not necessarily. It’s more of a sign that it’s time to adapt if you want to stand out. You can do this through making ads in traditional formats that are so good that they become undeniable, but that’s extremely hard. And then there’s the alternative, which is experiential marketing.

Ever since the video games industry was in its infancy, developers and publishers alike have been trying to sell the general public on immersion. Play this game, they suggest, and you’ll really feel as though you’re in the virtual world. Early on, it worked as a marketing tactic, but then people stopped being impressed by graphics. How do you shake things up?

Well, you follow in the footsteps of Microsoft Studios and Crystal Dynamics. A core part of the Tomb Raider game series is about surviving in hostile environments, and to promote a new game release in 2015, a stunt was held: “Survival Billboard”. Eight people were challenged to stand in front of the billboard for 24 hours while being subjected to artificial weather (directed by social media votes, no less).

The lesson? You don’t necessarily need to offer each prospective customer an experience. Such and other examples of experiential marketing show us that if you can offer someone an experience, and make it easy to follow along, you can have a comparable impact upon a huge audience.

The Kit-Kat brand, revolving around breaks, has always been about the experience, so it isn’t surprising that it took the experiential marketing route back in 2013. As a response to perceived technological obsession — and an excuse to sell delicious chocolate wafer bars — the company set up zones in Amsterdam that blocked Wi-Fi instead of offering it for free (as was common).

When you’re cut off from the digital world, you’re forced to pay more attention to your surroundings and give yourself some rest. If you also decide to purchase and eat a Kit-Kat, well, that’s simply an added benefit.

The lesson? There’s always value in going counterculture instead of running with the latest trends. If life is going by quickly, slow things down — if competitors are going left, take a right. Many examples of experiential marketing show us that you’ll be more memorable that way.

Pop-up stores often work well, particularly for retail brands that mostly (or exclusively) sell online in normal circumstances, and even more so for fashion brands in particular that need to show their quality (experiential ecommerce is key to the future of fashion retail, but we’re still some way off online experiences that can rival the best offline buying experiences). Such stores are innately experiential to some extent through being moored in engaging environments, but you can do more, and that’s what Adidas did in 2013.

Not only did the company bring in a celebrity in the form of Derrick Rose, then the point guard for the Chicago Bulls NBA team, but it also introduced a fun challenge. Shoes were placed on a shelf 10ft above the ground, and the kids attending were told that they could win them if they could retrieve them. How high could they jump? They certainly found out.

The lesson? Don’t just offer something for free: make it the reward for a challenge. The challenge will be fun for people (and pick up some good PR), and it will protect the value of your brand because you’re not exactly giving the reward away for nothing.

Pay With A Cupcake

In 2015, Google decided to promote a new photo app release with cupcakes, and you can’t argue with the idea (who doesn’t love cupcakes?). The plan was to incentivize downloads of the app by offering a cupcake to anyone who took a photo with it, and it definitely worked — though there was a twist the company didn’t expect.

Zappos, a shoe and clothing seller, heard about Google’s plan, and decided to take advantage of that arrangement with its own exchange system. Next to the Google cupcake truck was a Zappos box that offered a deal: pay with a cupcake, and receive a watch or a pair of shoes. Pretty smart move, right?

The lesson? Take advantage of circumstances, even if they involve the marketing efforts of other brands (provided they’re not your competitors), to get some easy publicity. You can even propose co-branding efforts to make event-based marketing cheaper.

Netflix has achieved worldwide fame through being bold and aggressive with its expansion and marketing. It spends heavily, but smartly (for the most part), and its effort to promote the 2016 revival series of Gilmore Girls was a great example of the latter aspect.

The show features a diner called Luke’s, and to build up hype ahead of the four-part reunion, Netflix partnered with local coffee shops throughout the country to temporarily convert them with Luke’s branding. This was a great win-win. It picked up a lot of buzz for the show, and it brought in a lot of customers for those coffee shops.

The lesson? Play to nostalgia (and memory in general). Socio-cultural forces are powerful, after all, and reproducing or imitating familiar elements from pop culture will always get attention — so think about what you could do.

Experiential marketing holds a power that traditional marketing can’t compete with. If there’s any room for it in your promotional strategy, take advantage, and use these lessons to guide you. You won’t regret it.

We thank MicroStartups for the contribution of these examples of experiential marketing. MicroStartups is a business community that celebrates inspiring startups, small businesses, and entrepreneurs. Whether you’re a solopreneur or a startup making your way in the business world, we’re here to help. For the latest news, inspiring stories and actionable advice, follow us on Twitter @getmicrostarted.

How to do Influencer Marketing – A step-by-step guide