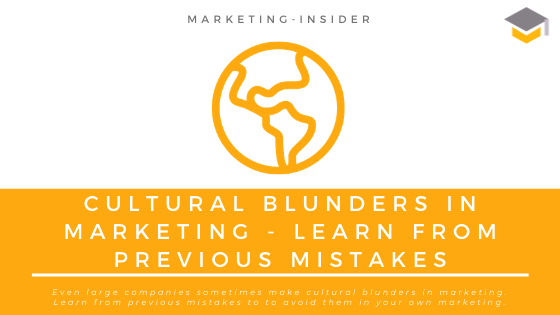 Mistakes are sometimes made in cross cultural marketing. What works great in one country can be disastrous in another. You have to consider how something will be translated and interpreted in different countries. It’s critical to research the culture of a country before marketing products there.

Even large companies sometimes make cultural blunders in marketing. This might be because of short-sightedness, hurrying to get a product to market before enough research is done, or simply not thinking enough about the sensibilities of a different country.

Examples of cultural blunders in marketing

Ikea, the Swedish furniture giant, almost named a desk “Fartfull” before someone realized that probably wasn’t a good name for it.

It turned out that the Italian mineral water named Traficante translated to mean “drug dealer.”

Another cultural blunder in marketing came when UK sports manufacturer Umbro named their new trainers the Zyklon. That was revealed to be the name of a gas the Nazis used in their death camps.

Honda was forced to rename one of its cars after it came to light that the original name when translated referred to a woman’s genitals in some Nordic countries.

Tesco had cartons of bacon flavored Pringles displayed near a major Muslim mosque in London’s Whitechapel area. Since Muslims do not eat bacon, some called this insensitive. Others called it a cultural blunder in marketing.

Hitler ice cream cones? People asked why anyone would give them this name. It turned out that the owner of the company apparently named the product after a quick-tempered relative.

The Food Basics grocery store initiated a promotion of Halal chicken, a Muslim product, to celebrate a Sikh religious holiday. The problem with that was that Halal meat is forbidden for practicing Sikhs. The marketing team must have confused Sikhs with Muslims.

In Africa pictures of what is contained in a food product are often printed on the labels. This is done because most people there are illiterate. So, there was widespread confusion when Gerber put pictures of babies on their baby food jars.

These examples show that many times companies don’t consider how their products will be received by the local and/or regional cultures internationally. Do they just assume their country’s products will be accepted unconditionally? Sometimes that seems to be the case. Unfortunately, though, there are many examples that show this often doesn’t work.

Poor cultural awareness is often the reason behind cultural blunders in marketing. It’s important to think beyond your own country’s religions, mores, styles, and preferences when developing marketing content and products for other countries. Not taking the time to do this can be disastrous.

What happens when something goes wrong and cultural blunders in marketing occur? Feelings might be hurt. Anger may even be aroused. It can negatively affect the product involved. The company might be embarrassed. Needless to say, all of these were not the desired outcomes.

It’s surprising that huge corporations are among those who have made cultural blunders in marketing. After all, they probably have teams of marketing professionals and budgets running into the millions of dollars.

There are a number of things that go into a marketing strategy. Something that should be basic is making sure not to make any cultural blunders in marketing.

How New Tech Is Disrupting Marketing in 2020