Cost-based Pricing – Pricing based on Costs 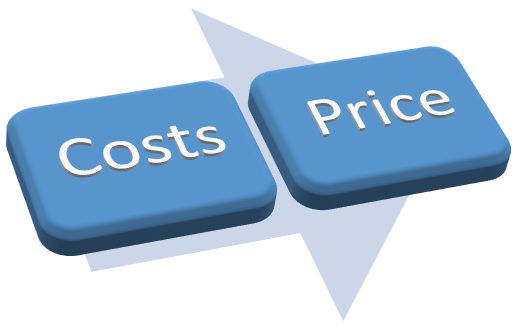 Cost-based Pricing is another approach to pricing. We have already learned about customer-value based pricing. Customer-value perceptions set the price ceiling: customers would not be willing to pay more. But costs represent the other extreme: costs set the floor for the price that the company can charge. Therefore, we should closely investigate the cost-based pricing method.

Cost-based pricing involves setting prices based on the costs for producing, distributing and selling the product. Also, the company normally adds a fair rate of return to compensate for its efforts and risks. To begin with, let’s look at some famous examples of companies using cost-based pricing. Firms such as Ryanair and Walmart work to become the low-cost producers in their industries. By constantly reducing costs wherever possible, these companies are able to set lower prices. Certainly, that leads to smaller margins, but greater sales and profits on the other hand. But even companies with higher prices may rely on cost-based pricing. However, these companies usually intentionally generate higher costs so that they can claim higher prices and margins.

Before going on, we should investigate the different types of costs. A company’s costs can take two forms: fixed and variable. Fixed costs, which are also known as overhead costs, do not vary with production or sales level. Examples are the monthly rent, interest or salaries. Variable costs, on the contrary, vary directly with the level of production. Each car produced by Chevrolet involves a cost for the inputs used, such as for the steering wheel, wires etc. Although these costs are the same for each unit produced, they vary with the number of units produced. Finally, total costs are the sum of the fixed and variable costs for any given level of production.

Returning to our thoughts on cost-based pricing, we see that total costs are most important: the company wants to charge a price that will at least cover the total production costs at a given level of production.

Especially in fierce markets (competitive markets), companies must watch their costs carefully. If it costs the firm more than its competitors to produce and sell a similar product, the company will eventually need to charge a higher price or make less profit.

To calculate the unit cost, we need the following formula:

Now suppose the company wants to earn a 20 percent markup on sales. The markup-price in cost-based pricing is determined by the following formula:

Consequently, the company will charge dealers $20 per toaster and hence make a profit of $4 per unit. The dealers, in turn, will add their own markup, making the product more expensive for the final customers.

BUT: Does Cost-plus pricing make sense? Generally, no. This cost-based pricing method may appear promising due to its simplicity, but it ignores demand and competitor prices. Therefore, it is not likely to lead to the best price.

Another approach to cost-based pricing is break-even pricing, or its variation target-return pricing. The company determines the price at which it will break even or make the target return.

Where total costs and total revenue lines in a break-even chart cross, the break-even volume is reached. It can be calculated using the following formula:

With a target return included, the formula changes slightly:

5 Don’ts of LinkedIn – 5 Things to avoid on LinkedIn

Target Market Identification – How to Figure Out...

The Marketing Funnel – What is it and...

Is Marketing a Good Major? Find the Right...

Sticker Marketing – Most Successful Campaigns of All...

Localization in Marketing – How to Boost Your...

What is a Product? Definition of Products and...

How to use a blog to grow organic...

Different Types of Shoppers – How to convince...